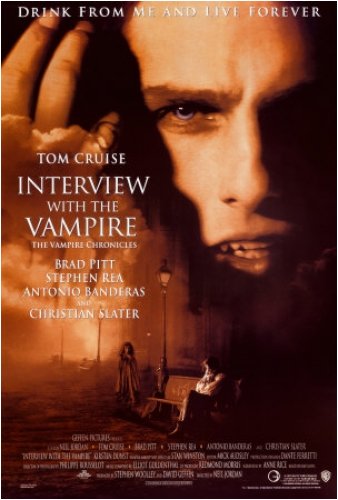 Neil Jordan’s adaptation of Anne Rice’s best-selling novel (she also wrote the script) is, at the very least, a triumph of gothic atmosphere and hunky homoeroticism. In fact, the presence of two of Hollywood’s leading matinee idols (three if one counts Antonio Banderas) seems to have distracted many critics from the fact that this is a superbly crafted and well-acted costume drama from an era when offbeat auteurs could still command big Hollywood budgets. Tom Cruise both channels and transcends his larger than life movie star persona in the role of Lestat, a centuries old vampire trying to make the most of immortality. The film kicks off with his indoctrination of Louis (Brad Pitt), a lovelorn New Orleans plantation owner, into the life of the undead, which allows the two men to remain beautiful and ageless from the 1780s to the 1990s. If the film has a weak link, it’s Pitt, who leans a bit too much on his pretty-boy good looks. Jordan also neglects some of the story’s more troubling themes of race and gender (ever notice how most of the vampires’ victims are black and/or women?) that might be too off-putting for mainstream audiences. At the same time, he teases at another provocative idea: That movie stars are vampires of a sort who can achieve eternal youth–but only on the silver screen.