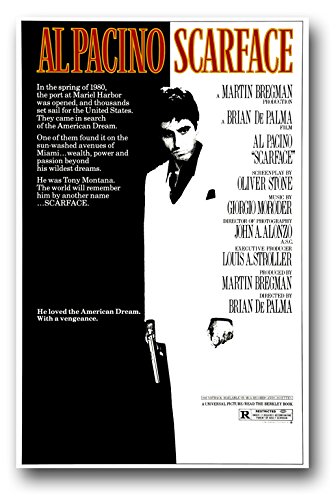 If the eighties were a movie, it would be Scarface (1983). Brian DePalma’s blood-soaked remake of the Howard Hawks classic may seem like an overwrought retread, and was largely treated as such upon its initial 1983 release. Many critics derided the decision by DePalma and screenwriter Oliver Stone to go bigger, if not necessarily better, than their source material.  Every theme implicit in the Hawks original (the immigrant story, the dark underbelly of the American dream, male hubris, brother-sister incest) is made explicit. All subtext becomes text. Italy becomes Cuba. Bootleg liquor becomes illicit cocaine. Guns become rocket launchers. With its punchy dialogue and operatic twists and turns, Stone’s script is about as subtle as a sledgehammer (or delicate as a chainsaw, as it were). Is Scarface good? Let’s call it an acquired taste. This reviewer enjoyed it as a delicious piece of cinematic pop art, one that both mirrored and foreshadowed the most outrageous excesses of the decade from which it emerged. At the very least, it is a cultural force to be reckoned with. Al Pacino’s scenery-chewing performance as Cuban-American gangster Tony Montana turned the character into a hip hop icon. And DePalma’s neon-and-pastel limned vision of life in the fast lane is truly a sight to behold.