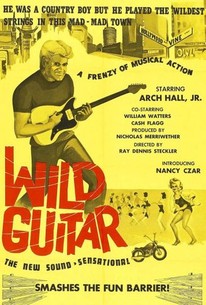 Ray Dennis Steckler’s rock n’ roll melodrama never quite rises above its shoddy origins as a promotional vehicle for B-movie mogul Arch Hall Sr.’s son, Arch Jr. Junior plays a standard archetype: The hayseed who comes to Hollywood in search of stardom. Inevitably, he meets a girl, encounters adversity and uncovers the dirty secrets of showbiz. The plot is hopelessly contrived, the acting shockingly bad (needless to say, Arch Hall Jr. did not become a star). But Steckler, who would go on to make the camp classic The Incredibly Strange Creatures Who Stopped Living Who Stopped Living and Became Zombies, proves himself a consummate filmmaker with a keen visual sensibility.  The film’s best scenes possess the same energy, vitality and sheer creativity found in French New Wave films of the same period. Unlike some other low budget auteurs, Steckler never made the leap to the mainstream. Still, Wild Guitar (1962) is a clear, if flawed document of his considerable talents.